Some of you, maybe not most, know about a podcast called “The Briefing” by Albert Mohler. Al Mohler is the president of the Southern Baptist Seminary in Louisville, KY, and “The Briefing” is a daily, 20-minute segment covering 3of the major news stories of the day and how we should think about them from a Christian perspective. I’d highly recommend it to you.

This past Thursday, Richard asked me to listen to it, and one of the stories was discussing a report released by the Center for Disease Control and Prevention, which was then reported in the New York Times.

This was a national survey of teenagers indicating that there was a growing sense of fear and despair among them. Those were the key words: fear and despair. The report stated: “An adolescent’s life can be bleak.” It can be depressing, hopeless.

Mohler pointed out that adolescence is never easy. It’s a stormy time of life when they are growing out of childhood into recognized adulthood. There’s an internal struggle with self-identity. But though there are bleak moments, it doesn’t have to be altogether bleak. And the tough times help bring maturity for adulthood.

I’ve heard secular reports that say things like “growing up with both parents in the home is a kind of privilege.” But it was said with almost a disdain. Like it’s an unfair advantage, rather than what should be the norm. Never is the aim of that kind of statement to say that the biblical design for marriage is the best. They just won’t say that.

As Christians we know that God placed into creation, for the benefit of all mankind, the structures of marriage and the family. God intended children to be brought up in a home with a father and a mother committed to one another and to God. And yet, we also know that the curse of sin doesn’t always make that possible.

Mohler said that when we hear stories about the difficulties on teenagers, we should have a concern for them and for society. Culture is removing the pillars God put in place to help teenagers get through a difficult time. The world is telling teens they need to be liberated, rather than connected.

And extending that idea of a family, Mohler reminds us that this also applies to the church. Statistics have testified that young people who have happy and healthy experiences in a church go through adolescence in a healthier way.

One research study said that if a teenager has even one adult relationship, one person who cares about them personally outside of mom and dad, he or she is far more likely to emerge as a healthy adult and stay connected with the church and with the faith.

We can’t remove the struggles of adolescence, but we should be able to make sure teenagers don’t go through them alone. And as a church, we have a special opportunity to do that for those who don’t come from a healthy family. That’s what Mohler was reminding us of.

The conclusion from the CDC was this: “There’s strong data to show that family support, and attention by parents to what you’re doing, can make the difference in an adolescents’ life.”

I actually heard a secular radio host recently talking about political issues and then he brought up child poverty. And he said: “You want to end child poverty? Put kids in a home with both parents. That’s the single greatest statistic for a kids’ success.”

Mohler ended that segment by pointing out that though the CDC feels compelled to say that, we don’t need to hear it from the CDC because we’ve already been told that by a higher authority.

God has told us that it is the duty of every father and mother to train their children—to raise them in the discipling and instruction of the Lord. And like I’ve said many times before, the clearest example we get of a father giving his attention and energy to teaching his son is the book of Proverbs.

The topic we come to today, is not a new one. Important topic = sexuality. Important for an individual and for the health of a society. Three lessons for pursuing sexual purity that honors God and invites His blessing. 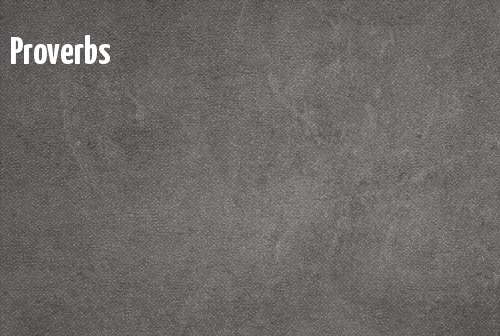 The Power of the Tongue

The Value of Work