[Note: A full transcript for this sermon is not available, but some notes are below.]

Anytime you study the psalms, one of the key components to keep in mind is the mood or the emotions. How does this psalmist feel? And how does he want his readers to feel?

Having just read it, I think most of us would say that Psalm 42 is not a happy psalm. That’s not the emotion being expressed.

Look at verse 1 again with me. As a deer pants for flowing streams, so pants my soul for you, O God.

That is not describing the ordinary thirst you might feel throughout the day or even the thirst you might feel after some exercise on a hot day. This is describing the thirst of a drought. This is someone desperately in need, searching for life the way a deer would be desperately searching for a brook or a stream during a drought. This is desperation. This is a profound emptiness and longing. His soul is panting.

Maybe you noticed how often this psalm made reference to man’s soul. He’s is desperate situation.

In God’s grace and in His providence, you might not be experiencing something like that at the moment, but those desperate times can come sooner than you think or sooner than you are prepared for. Some of you may actually be living in this kind of situation, even if nobody else knows.

This world brings pain and difficulty. Generally speaking, I think the older we get, the more we realize how sorrowful this life can be. There’s no need to pretend like everything is fine because, many times, everything is not fine.

God’s word never hides the fact that this world hurts. We can either acknowledge that and learn to seek help, or, like a lot of people in this word, we can try to hide. Sometimes people hide behind drugs and drunkenness. And sometimes, we hide behind music and movies and TV shows and internet videos. Those are all examples of superficial responses to a very serious problem.

Like I said, the Bible admits that sometimes we are going to face some very serious problems, not just externally, but internally, spiritually and emotionally. The wise father of Proverbs, wanting to prepare his son for life, made sure he knew how difficult life can be at times.

Proverbs 12:25 says: Anxiety in a man’s heart weighs him down. Proverbs 13:12 says hopelessness makes the heart sick. Proverbs 14:10 adds: “The heart knows its own bitterness, and no stranger shares its joy.” Proverbs 15:13 says: “by sorrow of heart the spirit is crushed.” And lastly, Proverbs 18:14 asks: A man's spirit will endure sickness, but a crushed spirit who can bear?

You put all those principles together, and you realize that there will be times when you feel absolutely crushed by life, and there may be no one around who knows what you’re going through. That’s an agonizing situation to be in.

Thankfully, God knows. Jesus Christ knows exactly what you’re going through. The same father who recorded the Proverbs we just read also included Proverbs 18:24—There is a friend who sticks closer than a brother.

From an earthly perspective, having friends is a gift. And from a spiritual perspective, there is no closer friend than Jesus Christ. To his disciples, who believed and trusted in Him, Jesus said, “You are my friends if you do what I command you. No longer do I call you servants, for the servant does not know what his master is doing; but I have called you friends, for all that I have heard from my Father I have made known to you.”

Jesus, as the living word of God, ministers to us through the written word of God. By His word, His Spirit can minister to our spirit in every season of life, including the most difficult ones.

We don’t know the exact circumstances behind Psalm 42, but some people believe the author is in some kind of exile. He’s away from Jerusalem and unable to return. His situation has brought him two distinct troubles.

The first pain is that he can’t gather with God’s people for worship. Look at verse 2— My soul thirsts for God, for the living God. When shall I come and appear before God?

Appearing before God is a reference to worship in Jerusalem, either with the Temple or the Tabernacle. We and the psalmist know that God is always with us; He is ever-present. But that doesn’t mean there aren’t some distinct special ways through which He ministers to us and makes Himself known. Corporate worship is one of those ways.

The psalmist can’t be with God’s people for corporate worship, so he feels detached from God. He is missing a vital element of His relationship with God. He’s missing out on a specific way in which God reveals Himself to His people. So, in one sense, He is cut off from God. That’s saying a lot about how significant the corporate gathering of God’s people is. The inability to gather with God’s people, creates a type of detachment from God.

In verse 4, the psalmist looks back on the earlier days when corporate worship was a normal part of his life. These things I remember, as I pour out my soul: how I would go with the throng     and lead them in procession to the house of God with glad shouts and songs of praise, a multitude keeping festival.

This man used to be a worship leader, but now he can’t worship with God’s people. Verse 6 says, My soul is cast down within me; therefore I remember you from the land of Jordan and of Hermon, from Mount Mizar.

This is a place at least 100 miles north of Jerusalem, where the Jordan River begins. He is far away from being with God and His people. That’s the first pain. He can’t gather with God’s people.

The second pain comes in verse 3. It’s the pain of attacks from his enemies. Verse 3 says: My tears have been my food day and night, while they say to me all the day long, “Where is your God?”

Instead of the refreshing satisfaction of God which comes from gathering with His people, this man has only his tears to satisfy his thirst. His primary interaction with others is not his brothers and sisters in the faith. It’s his enemies who taunt him continually.

Like Job’s wife, they’re saying to him, “Curse God and die! Your God has abandoned you!”

These enemies are mentioned again in verses 9 and 10, and the pain he feels is agonizing. Look at verse 9 and 10 with me. I say to God, my rock: “Why have you forgotten me? Why do I go mourning because of the oppression of the enemy?” As with a deadly wound in my bones, my adversaries taunt me, while they say to me all the day long, “Where is your God?”

It’s very possible that these enemies, these adversaries, are responsible for keeping him away from Jerusalem. Maybe he’s a prisoner. But even if he isn’t, these enemies add to his suffering because they taunt him. They oppress him. They mock him with 4 words, mentioned in verse 3 and verse 10—“Where is your God?”

Like I said at the beginning of the message, a big part of studying the psalms is paying attention to the emotions and the feelings. As I was studying Psalm 42, I started to keep a list of words that described what the writer was going through. He is thirsty. He’s anxious. He’s unsure. He’s sad and confused. He’s desperate and depressed. He feels forgotten and detached and separated. He’s alone. He’s isolated. He’s overwhelmed and overcome and overpowered. He is oppressed and attacked and mocked and ridiculed and ashamed. He is downcast. He is in despair.

So, what can we learn from Psalm 42 about those times in life? What lessons does Christ, our great and faithful High Priest, have for us this morning?

Let me share with you 4 lessons to remember in times of desperation. These will be lessons you need to remind yourself about and also remind one another about as you build one another up in love. These are lessons that help you grieve with those who grieve.

Revelation 21:3-4—Behold, the dwelling place of God is with man. He will dwell with them, and they will be his people, and God himself will be with them as their God. 4He will wipe away every tear from their eyes, and death shall be no more, neither shall there be mourning, nor crying, nor pain anymore, for the former things have passed away.” 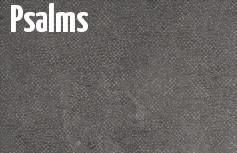 Give Thanks to the Lord