Today, our focus is going to be unity, which is especially absent in our culture when you look at all the headlines. Mainstream articles or reports about presidential candidates, climate change, homeschooling, police reform, or COVID regulations are typically not intended to bring people together. They are intended to polarize, to drive us apart. Polarizing viewpoints get clicks. They make for more attractive headlines.

But most of what we see in the world and in our culture is not what we should be seeing in the church, particularly in a local church. God wants the world to see unity in the church. That doesn’t mean we all look the same. But it does mean there is harmony and love and a like-mindedness in what we are pursuing.

In John 13:35, Jesus says to His followers, “By this all people will know that you are my disciples, if you have love for one another.”

Sometimes, the Bible talks about unity (or oneness) in a justification sense. Justification is the aspect of salvation when a sinner is declared righteous by God on the basis of Christ’s life, death, and resurrection. And that happens at the moment of faith and repentance. That’s justification.

Colossians 3:11, speaking of the spiritual transformation at salvation, says, “Here there is not Greek and Jew, circumcised and uncircumcised, barbarian, Scythian, slave, free; but Christ is all, and in all.

Coming to Christ doesn’t erase our differences, but those differences play no part in our justified standing before God. We are one in and through Jesus Christ. That’s our spiritual unity.

The Old Testament prophets spoke about a time when the nations would stop their warring, and they would all come together to worship the one, true God. The enemies of God will be removed, and every nation will come and bow down before the Messiah.

In Revelation 7, John tells us of a vision he had in heaven during the Great Tribulation: “I looked, and behold, a great multitude that no one could number, from every nation, from all tribes and peoples and languages, standing before the throne and before the Lamb, clothed in white robes, with palm branches in their hands, and crying out with a loud voice, ‘Salvation belongs to our God who sits on the throne, and to the Lamb!’”

Then in chapter 21, after Christ’s return, we get a vision of the heavenly Jerusalem: 23 And the city has no need of sun or moon to shine on it, for the glory of God gives it light, and its lamp is the Lamb. 24 By its light will the nations walk, and the kings of the earth will bring their glory into it, 25 and its gates will never be shut by day—and there will be no night there. 26 They will bring into it the glory and the honor of the nations.

That’s the final unity of God’s people. The curse of sin is removed. We have the new heavens and the new earth. And God’s saints receive a glorified body, free from any physical or spiritual corruption.

That should give us hope and encouragement. This world is filled with conflict, but that’s going to be done away with. Jesus will make sure of that.

In the meantime, however, here we are—justified but not yet glorified. And what comes between justification and glorification? What is God doing in your life right now, by His Spirit? We call that sanctification. Sanctification is the practical outworking of who we really are in Christ Jesus. We have been declared holy by justification. And now, sanctification is holiness being manifested more and more in our daily life.

And just like unity is connected to justification, there is a unity connected to our sanctification. I’m going to call that our practical unity. Because of justification, we are already united. But because of this sinful world and our sinful bodies, we need to exert ourselves to show that unity practically.

Brothers and sisters don’t work to become a family. They’re already a family. And as a family, the father calls them to live in accordance with who they are. Do you get that?

Practical unity isn’t about changing our status. It’s about making our status evident in this world. That’s practical unity. That’s what the Apostle Paul is aiming at when he says we should be eager to maintain the unity of the Spirit in the bond of peace.

That’s from Ephesians 4, verse 3. We’re already united spiritually, but we need to demonstrate that practically. And backing up one verse, Paul tells us how to do that. It takes humility, gentleness, and patience. It takes bearing with one another in love.

Practical unity is a battle, not just because we’re different, but because our sinful nature takes those differences and makes them a source of division.

But there is one category that I think separates people more than any of those. In fact, it is a difference that has come into this world, specifically as an act of judgment. Which one is that? I’m talking about language.

Genesis 11:4 tells us their reasoning. “Then they said, “Come, let us build ourselves a city and a tower with its top in the heavens, and let us make a name for ourselves, lest we be dispersed over the face of the whole earth.”

This was a monument of arrogance and pride and disobedience.

The word Babel means confusion. This was the “Tower of Confusion.” When God wanted to disrupt the unity of a rebellious people, and a rebellious world, He didn’t send a disease or a natural disaster; He mixed up their languages. That was His judgment.

Now, in the end, we know that this is going to work for God’s glory, because there will be a beautiful, diverse mosaic of people from every tongue and nation worshiping before the throne of God. In the meantime, however, it produces tension. Language is a major barrier to unity. And so, it is a major barrier to the practical unity of God’s people.

Here at FBBC, that’s not a theoretical statement. It’s something we have to deal with every time we get together. In fact, we’re dealing with it right now. We have English and Spanish (and ASL). These are languages within the membership of our church.

What I’d like to do today is sort of pull back the curtain a bit, or look under the hood, of our church. I think this is a good day to talk about this since we’re focusing on unity. It’s not really going to be a sermon by the way; it’s more of a seminar on our church.

Here at First Bilingual Baptist, we are trying to do what we can to minister to the two major languages of our community, English and Spanish. And that’s not something that’s directly addressed in the Bible.

People spoke different languages in the first century, but it’s hard to know exactly how much of each language the people spoke. Many of the Jews in Jerusalem knew Aramaic, and the higher-ranking nobles in the Roman Empire would have known Latin. But almost everyone knew Greek at least to some degree. So it’s not exactly the same situation we have now.

Not everybody here speaks English, and not everybody here speaks Spanish. That’s our culture. And that’s even some of our own families. We have grandparents and parents who don’t know very much English, and children and grandchildren who don’t speak very much Spanish. So, in order to minister to families as a whole, we need to address both languages.

That’s why we have one elder group. That’s why we generally have the same preacher for both congregations, and I think it’s been that way basically since this church began. We see a value in having a family with different languages hear the same message since they are in the same church.

Being a bilingual church is also why most of the time we take the Lord’s Supper and do baptisms in a bilingual service. We believe those are church ordinances, and they are best practiced by the church as a whole, which for us means English and Spanish together.

Now, when you have English and Spanish in the same service, you’ve got some options. You can split the languages into two services, or you can have them together. And if you have them together, then you need to think about how to do translation.

Translation is itself not an efficient way to do things. Those of you who only speak one language have to stop and start. Those of you who speak both languages have to hear things twice, and potentially get distracted by gauging the translation.

I want you to realize that I understand those difficulties. And that’s why, when we had the use of the building, in order to make the best use of the time, and to serve our flock better, our normal custom was to have an English service and a Spanish service. And then the classes and the childcare filled in the rest of the building.

Right now, we can’t really do that—at least in the way that we’re used to. So, here we are. And next week we’ll have a bilingual members’ meeting with a Lord’s Supper and the presentation of new members. What’s after that? And how long are we going to be outside? And what if it rains? And are there plans to add more to what we’re doing?

The short answer to all that is: I don’t know. But the elders are going to be talking about it, and we would greatly benefit, not just from your input, but from your support and your willingness to serve. We don’t have all the answers, but we trust God is going to use this time for His glory, if we all approach it with the right attitude.

When we think about how to be a united church with families that come from a mix of English and Spanish, there aren’t really any biblical models to follow. What we do see is that the focus of the Bible is not on programs, but on our hearts, our character.

There is no such thing as a perfect church. And with a bilingual, that only means more obstacles or annoyances. But here’s what our commitment should be. I’m going to read form Colossians 3 and then we’ll close in prayer.

After I pray, the formal service will be over, but I encourage you to get to know someone just a little bit better, and maybe commit for them or talking to them at least one time this week. How’s that? And if you need a translator, we’ve got plenty around.

Here’s Colossians 3:12-14—Put on then, as God's chosen ones, holy and beloved, compassionate hearts, kindness, humility, meekness, and patience, bearing with one another and, if one has a complaint against another, forgiving each other; as the Lord has forgiven you, so you also must forgive. And above all these put on love, which binds everything together in perfect harmony. 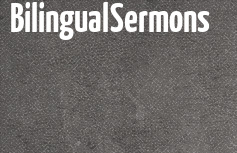